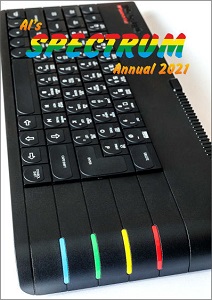 Very nicely presented. I have a couple of observations:

* The last Rick Dickinson Spectrum design was the Vega+ (although I preferred the Solstice design study).
* Multicolor on HDMI is trivial. The ZX-Uno can do it at any refresh rate on VGA simply by scaling all the timing values.
* 2020 was a big year for ULAplus and not one mention.
* 2020 was a big year for the ZX-Uno and not one mention.
«Dime con quién andas, y te diré quién eres» — Cervantes
Arriba

To Cheveron: Thanks for taking the time of reading the Annual and for your observations, here are my answers:
1) Excuse me, but nowhere in the article it is stated that the Next was Dickinson's last design; it is only said that the last Spectrum designed by him was the 128; and the Vegas are not Spectrums, but handheld consoles that emulate the Spectrum for the strict purpose of gaming. Coming to think of it, the Dickinson Associates website seems to imply (http://theproductdesigners.com/news.html) that the Vega+ was designed before the Next. But again, this was not discussed there.
2) The article is about my personal impressions of the Next, not the ZX-Uno (also see answer n. 4).
3) Personally (no offence, I know you are involved in its development) I am not that interested in the ULAplus. I think of it rather as a sort of exotic curiosity. Maybe a couple of the games I chose to review for the Annual have a ULAplus version available, but I didn't even think about checking it to be honest. In future Annuals, I'll mention the presence of ULAplus-enhanced versions of titles released in the year for those who are interested (actually you are the first to raise the issue, no one else did before, not even last year).
4) I have no experience of the ZX-Uno so I cannot really say anything about it, at least firsthand. The Annual deals with my personal views and experiences - as stated in the Editorial since the first issue -, is primarily focused on games (those I pick for the reviews and those I made in the year and have in the making) and has no pretension to be all-encompassing. In fact, it is not "the" Spectrum Annual, but "Al's" Spectrum Annual.

The observations were just that. I wasn't expecting a response, but since you took the time allow me to respond to your response.

1) What is and isn't a Spectrum is entirely a matter of opinion. Do the Timex models count? Do unofficial clones count? Do the Amstrad-era models count? Does the em@iler count? In my view the Vegas are Spectrums. The only thing they can run is Spectrum software and both Clive and Rick (on the Vega+) were involved.

2) Fair enough, but my observation stands.

3) No offense taken. I'm not interested in the SpecNext. I was involved in the development of ULAplus, but I don't hold the rights to it anymore and I've moved on to other projects. On the other hand, lately it's having a bit of a renaissance so I'm sure people will appreciate the coverage in future annuals.